Young Immigrants On Edge as Trump Administration Ramps Up Deportations

You are here: Home / Resources / News / Young Immigrants On Edge as Tr...

Young immigrants on edge as Trump administration ramps up deportations 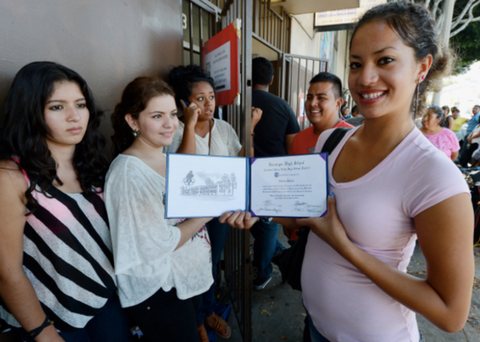 For many immigration activists, the Wednesday deportation of Guadalupe García de Rayos — a Mexican-born mother of two American children who was convicted of using a fake Social Security number in 2008 — is a worrying sign. García de Rayos, who had been living in America for more than 20 years, wasn’t considered a priority for deportation under the Obama administration, given the nature of her conviction.

That apparently changed as a result of some little-noticed provisions in President Trump’s January executive orders on immigration. And so, during her regular check-in with immigration authorities last week, García de Rayos was taken into custody and deported.

The suspicion among activists is that García de Rayos represented low-hanging fruit: despite being technically undocumented, her whereabouts were quite well-known to authorities and she’d long been complying with the terms under which she’d been allowed to remain in the country.

There are thousands of other immigrants living in America who offered up their names and locations in exchange for the ability to stay and work in the country they’ve long called home: the so-called DREAMers, once-undocumented immigrants who had been brought to the US as children. García de Rayos, too, came to the U.S. when she was just 14 years old and, while she is not one of the one of the DREAMers who chose to apply for DACA, her situation feels too similar to many of them.”

“About 750,000 people — ‘DREAMers’ — were exposed to the government on the basis that the government will never use their information maliciously, meaning to deport them, to target them, to discriminate against them,” said Ivy Teng Lei, a beneficiary of the Deferred Action for Childhood Arrivals (DACA) program and activist in New York City. “But the Obama administration, through DACA, has exposed us and we cannot go back into the shadows.”

Muslim American Olympian Ibtihaj Muhammad says she was detained by U.S. Cus...

A Blueprint for Investing in Vulnerable Young Girls
Scroll to top