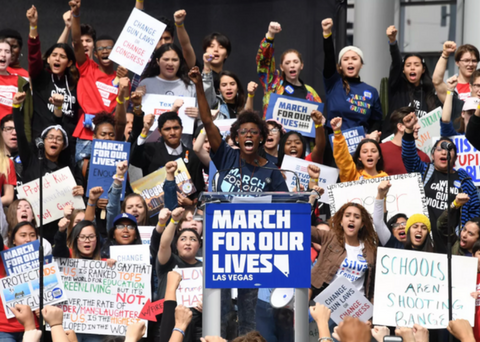 Black women and girls are often the victims of gun violence.

When tens of thousands of Americans took to the streets on Saturday to demand more gun control in the wake of a high-profile school shooting last month, several young black women were at the front of the protests.

In addition to calling for stricter gun control policy, they had a more nuanced message to deliver: America has failed to focus on black victims, especially black women and girls, who are disproportionately affected by gun violence.

“I am here to acknowledge and represent the African American girls whose stories don’t make the front page of every national newspaper, whose stories don’t lead on the evening news,” said 11-year old Naomi Wadler during a speech at Washington’s March for our Lives.

Wadler, who helped organize a walkout at her elementary school earlier this month, spoke of black girls like 17-year-old Courtlin Arrington, who was fatally shot in her Birmingham, Alabama, high school classroom in early March; Hadiya Pendleton, a 15-year-old shot and killed in Chicago days after performing in President Obama’s second inauguration; and Taiyania Thompson, a 16-year-old shot and killed in a Washington, DC, apartment earlier this year.

“For far too long, these names, these black girls and women, have been just numbers,” Wadler added. “I’m here to say ‘never again’ for those girls too.”

In the weeks since the February 14 Parkland school shooting, student survivors have dominated the national stage with their calls for gun control. Their activism has not been without its detractors, but it has also drawn considerable support from celebrities and the media.

For communities of color who have been afflicted by gun violence for decades, and who feel that their concerns have been largely ignored by politicians and the media, this difference has been jarring.

Read the full article on Vox.

‘I Am Here Today to Represent the African American Girls Whose Stories...