If Trump Ends DACA, Here’s How Many Students Could Be Affected

If Trump Ends DACA, Here's How Many Students Could Be Affected 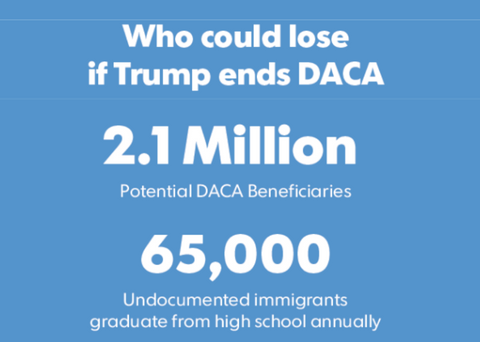 President Trump has vacillated between expelling all undocumented immigrants and expelling only those with criminal pasts. And his administration’s lack of clarity on the issue so far leaves the fate of many undocumented students at U.S. colleges and universities up in the air.

Many undocumented college students benefit from the Deferred Action for Childhood Arrivals (DACA), an executive order signed by President Obama in 2012. DACA provides protection from deportation and a work permit for two years for many undocumented immigrants who were under age 31 as of June 15, 2012, who came to the U.S. when they were younger than 16, if they meet specific requirements.

The states with the largest populations of potential DACA beneficiaries are California, Texas, Florida, Illinois and New York. More than a million undocumented immigrants might qualify for DACA in these states alone, according to the American Immigration Council.

There are signs that the Trump administration at least appreciates the magnitude of the issue. White House Press Secretary Sean Spicer told reporters that the president “understands” the situation that undocumented students are in.

President Trump has expressed sympathy for unauthorized immigrants who come to the United States at a young age, and his administration is currently accepting DACA applications.

Yet Trump has also established he’s not afraid to leverage federal funding to get his way. Last Thursday, for example, he threatened to cut funding from U.C. Berkeley after campus protests turned into riots over a scheduled Milo Yiannopoulos speech. Trump also signed an executive order to cut federal funding to sanctuary cities.

Many universities have pledged to protect the identity of their unauthorized immigrant students, including the University of California system. In a statement issued in November, U.C. pledged to “continue to admit students in a manner consistent with our nondiscrimination policy” and maintained that “undocumented applicants with or without DACA status will be considered for admission.”

Read the full article and see all the charts and numbers on USA Today.