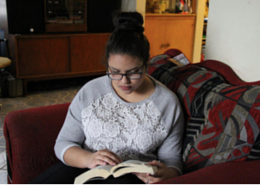 Latinos born in the U.S. have a higher rate of depression and anxiety than Latino immigrants, according to studies in several medical journals.

“What has been consistent across those studies is the idea of the immigrant paradox where we find Latinos who are U.S. born have (double the rate) of depression than their immigrant or foreign-born counterparts,” said Lucas Torres, an assistant professor in the psychology department at Marquette University.

According to Torres, this paradox exists because U.S.-born Latinos are more embedded in American culture, adding stressors that immigrants do not experience. For girls such as Montes, the risk of being diagnosed with a mental illness is even higher than the general Latino population.

“Just looking at depression rates in general across ethnic groups, it is around ages 11 to 13 that there is a spike in girls,” Torres said.

At an age when identity development, which relies on the intersection of gender, sexuality, socioeconomic and ethnic backgrounds, is at its peak, the way a girl manages the stress of negotiating gender roles and pressures in her Latino household is crucial to her mental health. And for Latinas specifically, mental illnesses are more likely to lead to fatal results.

According to a 2008 study in the Journal of School Health, Latinas have disproportionately high rates of anxiety, suicidal ideation and suicide attempts. “Depressive symptoms among Hispanic adolescent females are especially alarming, with suicidal and self-harm behavior nearly three times higher than adolescents from the general population,” wrote Ritika Batajoo, an MD/MPH candidate at University of Wisconsin School of Medicine and Public Health, in her dissertation on the topic.

Listen to the story and read the full article at WUWM / NPR News for Milwaukee.

Why I Went on Jeopardy