Rebecca Epstein: Why can’t we treat girls of color with respect? 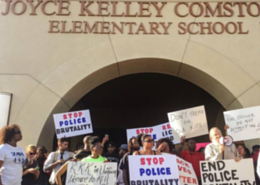 Once again, this week, news feeds were filled with a shocking video of a police officer slamming a girl of color against the floor in school, her face landing against the concrete. This time it was in San Antonio.

But it’s only the latest of many recent examples across the country: in Chicago a school security guard handcuffed a six-year-old black girl for taking candy off of a teacher’s desk, and left her under the stairs to learn a lesson. In Columbia, S.C., a police officer pulled a black schoolgirl off her desk and slammed her on the floor, where she slid several feet, though she did not present a threat. These confrontations received a high level of scrutiny in the press, but we know these are issues that girls of color face in schools every day.

Statistics show these are far from isolated incidents. Like their male peers, girls of color across the country are pushed out of school and into the juvenile justice system at rates far higher than their white counterparts. The U.S. Department of Education found that African-American girls are over-represented in all discipline categories nationwide. In particular, they are suspended at higher rates (12 percent) than girls of any other race or ethnicity and all male students except African-American boys. This is a clarion call for systemic change.

Girls of color are often disciplined for infractions that are, in truth, code for bias against racially laced perceptions of bad attitude: disobedience, disruptiveness, talking back and dress code violations. Yet as Monique W. Morris finds in her new book, Pushout: The Criminalization of Black Girls in Schools, Black girls’ perceived “attitude” is actually a “response to suggestions that their identity [is] an inferior one.”

Read the full Op-Ed in the Dallas Morning News.

VIDEO: Data on Girls of Color
Scroll to top