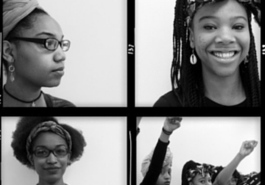 Photographer and youth organizer Scheherazade Tillet first had the idea for “Picturing Black Girlhood” about seven years ago, when she was visiting the Chicago Art Institute’s “Girls on the Verge,” an exhibition on adolescent girls. The show included work by photographers like Sally Mann and Lauren Greenfield, showcasing images of that precious and bizarre moment of being not a girl and not yet a woman.

However, Tillet couldn’t help but notice that in the exhibition there were only one or two images of people of color.

“I felt like their voices weren’t there,” Tillet told The Huffington Post. As the founder of A Long Walk Home, a nonprofit organization that uses art therapy to inspire young women and protect girls from violence, Tillet works closely with women in her Chicago community. “I wanted to take my girls to see the show, but how could they identify with it if they didn’t see themselves represented?”

As an organizer and a curator, Tillet felt moved to curate an exhibition of her own, one that told the story of black girls in America today. As a photographer, Tillet wanted to do more. “I wanted my girls to tell and archive their own stories,” she said. “How do they define girl culture themselves? I knew a true story had to come from within.”

Ever since, Tillet has been collecting and archiving artwork depicting black teen girls, including photographs taken by the girls themselves. “I wanted to bring to life what it meant to be a black girl,” Tillet said. “When you’re in an exhibition you’re in their world as opposed to just looking at their world.”