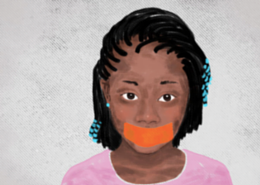 The video, taken at Spring Valley High School in Columbia, S.C., went viral last fall: A school safety officer flips a desk to the floor with a girl seated in it, then flings her across the floor. The student is African-American; the officer is white.

Ultimately, the officer was fired based on the fallout surrounding that video. But Monique Morris, a scholar, author and activist, was concerned about what else happened, when the cameras were turned off.

The student, 16, was both arrested and suspended immediately after the incident. So was a second student, another black girl, Niya Kenny, 18, whose role seemed to be encouraging her classmates to film the incident.

Moreover, says Morris, “My conversations with the legal community in South Carolina revealed that when those girls came back to school they were faced with a pretty hostile environment.” Both girls started avoiding school.

Recent research has documented that black girls are punished at school at rates that are even more disproportionate than those experienced by black boys. For example, they are suspended six times more often than white girls. Morris calls this “a story untold,” and she sets out to tell it in her new book, Pushout: The Criminalization of Black Girls in Schools.

For the book, Morris spoke with straight, queer and transgender teenage girls in the San Francisco Bay Area, Southern California, Chicago, New York, New Orleans and Boston. They had been in juvenile detention, in gangs, in foster care, in group homes; they had been homeless, runaways, sexually abused and exploited. And they told stories of how schools, rather than being safe havens, had become one more “hostile space” on that list.

“Black girls are getting the message that no one wants them there [in school] more than other girls,” says Morris.