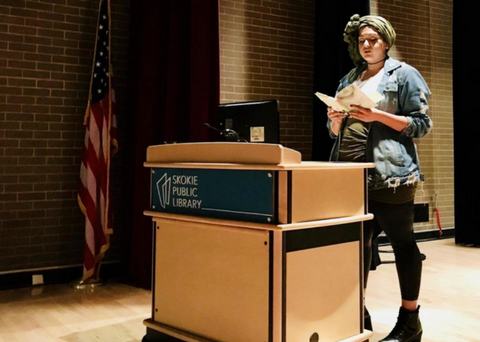 Amani Al-Khatahtbeh was still a high school student when she launched MuslimGirl.com from her bedroom, sharing the experiences of a Muslim-American teenager in a post-Sept. 11, 2001 world.

“The reason I became so passionate about these conversations is because I grew up literally post 9/11,” she told those gathered March 19 at the Skokie Public Library. “9/11 happened when I was 9 so my entire life has been virtually shaped under modern-day Islamaphobia.”

Al-Khatahtbeh’s blog gave rise to her 2016 book, “Muslim Girl,” which was selected this year as the main book for Coming Together in Skokie and Niles Township.

Myriad programs on different aspects of Muslim culture have been held since January at venues throughout the township.

The Coming Together committee selected”Muslim Girl” for similar reasons that the blog and book became so popular, organizers said.

According to organizers, Al-Khatahtbeh’s honest, revealing and sometimes painful experiences resonated with Muslim American girls and women who did not necessarily have a place where they could share their own challenges or relate to those going through similar experiences.

Read the full story on the Chicago Tribune.

WNYC Studios: ‘I Want Someone to Love Me Even for a Second’
Scroll to top