New NYC Initiative for Women and Girls of Color

You are here: Home / Resources / News / New NYC Initiative for Women a...

Mic: NYC Just Launched Its Most Progressive Initiative Yet for Women and Girls of Color 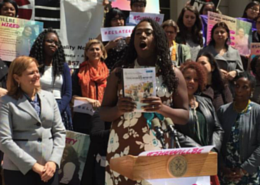 In 2014, President Barack Obama made a commitment to bettering the lives of the nation’s young boys of color with his “My Brother’s Keeper” initiative. A year later, New York City Mayor Bill de Blasio doubled down on predecessor Michael Bloomberg’s 2011 Young Men’s Initiative, a similar program devoted to supporting the city’s black and Latino men.

But even as many applaud these programs for being powerful and necessary, they leave a pressing question in their wake: What about women?

New York City’s Young Women’s Initiative is a direct response to the girls and young women of color neglected by these efforts. New York City Council Speaker Melissa Mark-Viverito announced the program’s launch in May 2015, and on Monday, on the steps of City Hall, she presented a blueprint on how the city council would work toward institutionalizing success for its young women of color.

The resulting report boasts over 100 policy recommendations for the city’s legislators, covering health, economic and workforce development, community support and opportunity, education and anti-violence and criminal justice. The council, along with philanthropic groups such as the New York Women’s Foundation, have donated $20 million in funds to implement the policies.

“You are women who embody what it means to be inspirational,” said Mark-Viverito, who was flanked by about 50 women involved in the initiative. “You are mentors, supporters and fighters — luchadoras. You are the future of our city. You are in the business of opening doors and shattering glass ceilings and you’re making a real difference in the lives of women and girls across our city.”

Mark-Viverito’s forward-thinking message is summed up via two hashtags: #SheWillBe and the Spanish translation #EllaSerá.

Read the full article at News.Mic.

This “New” Feminism Has Been Here All Along