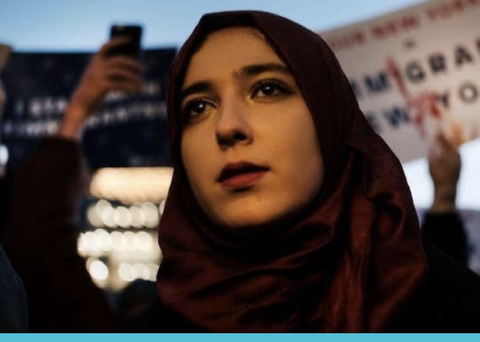 Though still in high school, Hebh Jamal has spent the last two years actively fighting Islamophobia. In the week since Donald Trump signed an executive order banning people from seven majority Muslim countries, Jamal has put her effort into organizing a New York City-wide student walkout. We caught up with her to see how she keeps herself and those around her motivated in their activism.

Seventeen-year-old Hebh Jamal is quickly emerging as a young leader in the fight against Islamophobia. As President Donald Trump ushers in a heightened wave of Islamophobia with his push to instate a travel ban for people from seven majority Muslim nations, including those seeking refuge from terror and violence, her work is more necessary than ever.

Jamal became politically active in 2015, after she was interviewed by the New York Times during her sophomore year of high school. The piece asked the then 15-year-old Muslim American student to describe her fears and experiences of harassment and Islamophobia in a post 9/11 world, as someone who was too young to even remember the 9/11 attacks. After the piece was published, Jamal, who was raised in the Bronx, was asked to speak at a local high school. In the two years since, she has organized protests, spoken at rallies, and continued to be a strong progressive voice in the resistance against Trump’s anti-Muslim threats and rhetoric.

The past two weeks—during which the country watched as the Trump Administration implemented a Muslim ban, thousands of people across the country took to the streets to resist it, and Judge James Robart effectively halted the executive order—has been an extremely busy time for Jamal. Apart from attending numerous marches and speaking to thousands at rallies protesting Trump and the Muslim ban, she has spent the rest of her time organizing a New York City-wide student walkout, set to take place on Tuesday, February 7 at 12:30 PM.

We spoke to the Palestinian-American Muslim activist about how she has managed to not only mobilize herself but inspire New Yorkers young and old to join a movement of resistance.

Read this full article and interview in Broadly.

12-Year-Old Marley Dias Is Publishing An Activism Guide For Children And Te...