You are here: Home / Resources / Books / How Black Girls Are Locked Out... 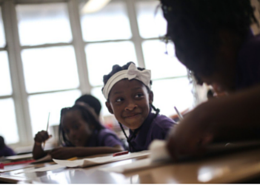 A new book exposes the way America’s punitive education system
funnels black girls from the classroom into the justice system.

On a Friday in April 2012, police officers arrived at a small public school in Milledgeville, Georgia. They were there to arrest a black female student for assaulting a principal and damaging school property. The girl in question was placed in handcuffs, brought to the police station, and charged with battery and criminal damage to property. Her name was Salecia Johnson. At the time, she was six years old.

Johnson’s arrest made national headlines and, while the charges were dropped, she was suspended until the start of the next school year. A school superintendent defended the school’s actions, calling Johnson’s behavior “violent and disruptive” and stated that the police were called out of “safety concerns.” The police reaffirmed this claim, asserting that Johnson was placed in handcuffs for the safety of other students as well as her own. In the local paper, an op-ed was published in which the author called the child’s actions “a dangerous display of uncontrolled anger/rage.”

In her new book Pushout: The Criminalization of Black Girls in Schools, Monique W. Morris argues that highly publicized cases like Johnson’s are only fragments of the widespread oppression black girls face in the American educational system. It’s a subject frequently overlooked in today’s conversations about racism and the school-to-prison pipeline, which focus on the plight of black men and boys. What this means, Morris explains, is that “the sometimes similar but frequently not so similar ways that Black girls are locked out of society become lost.”

New Report: Fight for Our Girls
Scroll to top