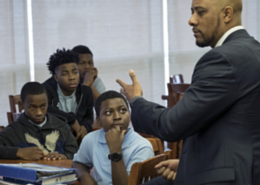 The District’s decision to pump $20 million into a program that focuses on boosting the academic achievement of minority males is under fire in a new study, which concludes that minority females are also lagging far behind their white counterparts.

The American Civil Liberties Union of the Nation’s Capital is questioning the legality of the ­taxpayer-funded “Empowering Males of Color” initiative. Its study found that city officials did not provide compelling reasons to create a program that excludes female students, a potential violation of federal laws barring gender discrimination.

“Based on the documents produced, DCPS [D.C. Public Schools] is unlikely to be able to justify the exclusion of girls from any of the sponsored programs, because DCPS’s own data lead to the unavoidable conclusion that the racial achievement gap impacts girls as well as boys of color,” the ACLU study said.

In the District, white students far outperform black students on standardized tests, and black male students are the lowest-performing demographic. But minority female students are also underperforming, and the ACLU’s “Leaving Girls Behind” report contends that it is unfair for the school system to paint the problem as a gender issue instead of a more broad racial one.